Jason and Rand versus the world

June 19, 2017 – A supersized Big Bird and Oscar wheelchair tandem team are aiming to bring home an unofficial world record on June 25, 2017. Friends Jason Cole and Rand Surbey are teaming up to push out a record-breaking finish time in the Scotiabank Vancouver Half Marathon, becoming the fastest half-marathon pushing a wheelchair in the world. 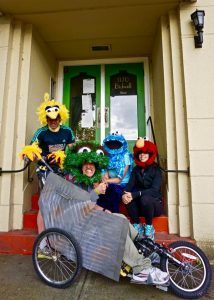 The pair is running on behalf of #TeamCPABC, raising funds for the Cerebral Palsy Association of BC (CPABC) and sporting colourful costumes designed and worn by their support crew. Together, they are working hard to break stereotypes and raise awareness of obstacles experienced by people with disabilities in everyday life.

In both 2013 and 2016, the powerhouse duo completed the half marathon in 1 hour and 34 minutes, technically topping the standing Guinness World Record of 1 hour 54 minutes. Their 2017 run, while certain to break the official record again, has been disallowed for a Guinness World Record because Rand uses a DIY racing chair designed and built by Jason rather than a commercially available model.

Commercially built specialty racing chairs start at $3,500. Jason builds custom racing chairs with interchangeable scrap parts and donates them to others who can’t afford them. This “for-the-people” approach has disqualified them from being considered for official GWR status.

CPABC Executive Director Feri Dehdar says, “Commercially and medically available wheelchairs are very expensive and need modification based on weight, seating position and types of CP. Jason put together this bike using refurbished stock with no money. Regardless of GWR’s decision, they do this to raise funds for CPABC programs and services which is a priceless intention. They are still heroes to us.”

Jason and Rand are supporting the CP community with their ground-breaking efforts. “The team at CPABC have been working hard in our community for us. They fill the gaps left in the social safety net we all take for granted and help so many in our community. Let’s help them help others!”

Recognized by the 2013 City of Vancouver Award for Accessibility and Inclusivity, the Cerebral Palsy Association of BC has supported people living with CP and other disabilities for over 60 years.

Jason and Rand are available for interviews or to join them on their training runs.

Cerebral Palsy Association of BC