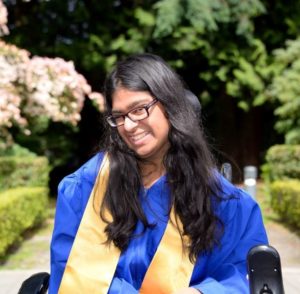 Mohini Takhar has always been drawn to writing. She is studying creative writing at Douglas College. “I chose this because I love theatre and I also love writing. My end goal is to be a screenwriter,” says the Surrey resident. Thanks to two Tanabe Bursaries from the Cerebral Palsy Association of BC, she is that much closer to her dream.

Making a life without limits one student at a time – that’s what the Cerebral Palsy Association of BC has been doing since 1994 with our bursary program, which is open to any student with cerebral palsy in BC who wishes to attend an institute of higher learning in the following year. The bursary is named after Yoshinori Tanabe in recognition of his years of dedication and advocacy for people living with Cerebral Palsy in British Columbia.

Mohini feels that the education she received from Douglas College, with help from the two bursaries, has helped her to be more confident as a writer. The tools and techniques she learns in the classroom will be useful for her future writing endeavours.

In the beginning of her creative writing courses, Mohini wrote about the good times in her life but left out an important characteristic: that the main character in her story has a disability. She says that the storyline was “okay” – but when she rewrote her short film to include that the main character lived with a disability, she was showered with praise and accolades. The screenplay showcases the abilities of a young woman with a disability who is able do many things independently and really get out of her comfort zone, just like Mohini.

Mohini’s inspiration for working in the film industry and as a screenwriter started with this film project, which she plans to produce

Join us for an unforgettable evening!