Vancouver, June 12, 2018 – Jason Cole and Rand Surbey are the fastest half-marathon wheelchair duo in the world – and this time they’re going to prove it.

Dynamite duo Jason and Rand are back once again to participate in the Scotiabank Half Marathon on June 24, running on behalf of #TeamCPABC and the Cerebral Palsy Association of British Columbia. In 2016 and 2017, the pair ran the Half Marathon in 1 hour 34 minutes, about 10 minutes faster than the current Guinness World Record. But when they submitted their time and evidence to Guinness World Records, they were rejected because they used a DIY racing wheelchair built by Jason. 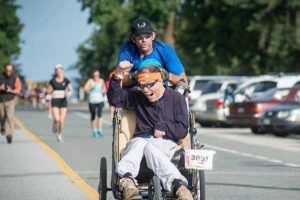 This year, the athletic adventurers will be competing using an out-of-the-box racing wheelchair. This will qualify them to officially hold the title of fastest half marathon wheelchair tandem team. The chair was funded by the Cerebral Palsy Association of BC and supplied by Wheelin’ Mobility.

Jason says, “After seven years of breaking the world record [in various competitions] but not having our time recognized due to an equipment technicality, all we managed to prove was that we were faster than them, not better than them. I have since realized that, to affect real change, we must first play by the rules we endeavour to change, even if we do not completely agree with them.”

But it is not only about the title for them. Jason and Rand are seeking notoriety in the name of fairness and inclusion. “Our goal since beginning our racing careers has always been to advance the inclusivity of fun athletic events, like running races and the Tough Mudder, regardless of people’s financial or physical status.”

It will be hard to miss these guys on the race course. “As always, we will be racing in costume and this year’s theme will super heroes, with Rand as the Hulk and I will be Captain Canuck,” Jason explains.

To support Jason and Rand in their record breaking race and goal of $5,000, and a chance to win a  limited edition, commemorative Captain Canuck coin, visit their fundraising page.

Jason and Rand are available for interviews or to join them on their training runs.

Cerebral Palsy Association of BC

The Cerebral Palsy Association of BC was started in 1954 by a group of parents who wanted to assist their children living with CP to reach their maximum potential within society. We provide support, education, and information throughout BC.

Previous Post: « Let’s get outside! Walking bike promotes Movement Without Limits
Next Post: #TeamCPABC raises over $10,000 for Scotiabank Vancouver Half Marathon and Charity Challenge »