As World CP Day approaches on October 6th, we invited our members to share their stories and how CPABC has helped them thrive. 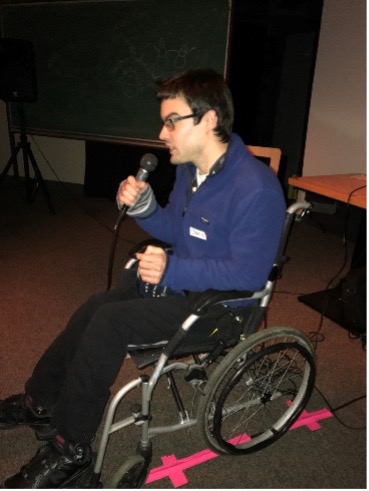 Meet Charlie. Charlie, also known by the nickname “Four-wheels”, is thirty years old. He enjoys reading, watching movies on Netflix, and volunteering at the Silver Threads Senior Citizens Activity Center. When Charlie is volunteering, he helps people learn how to use computers and assists with any problems they may be having. Charlie really enjoys volunteering at the senior center because it gives him a chance to help people who might not be that familiar with using computers so that they can get the most out of their technology.

Charlie also goes to a gym called MOVE, which is an adaptive fitness place. When he is there, he has a regular workout of forty-five minutes on a rowing machine and fifteen minutes on a handcycle machine. Charlie is also involved with the organization Power to Be, which is an organization that specializes in outdoor recreation activities for people facing all types of different challenges. Some of the activities that Charlie has been involved with in the past with this organization include rock climbing at Boulder’s Climbing Gym in Saanichton, BC. He finds that rock climbing gives him a good workout and makes him sore and achy the next day. He also has done hiking out at Prospect Lake in Victoria.

Cerebral palsy affects Charlie in several ways. He uses a wheelchair all the time to get around, hence his nickname, “Four-wheels”. Charlie has some difficulty finding his way around places he hasn’t been to before, so it takes a few visits before he feels comfortable and no longer worries about getting lost. Charlie’s hands will shake when typing on a keyboard, which causes him to make a lot of spelling mistakes when typing, so he finds the autocorrect function that is built into the Macintosh computer really useful.

How CPABC has helped

According to Charlie, “Being a member of the CPABC benefits me because I am able to attend the yoga class that is held every Tuesday and Friday over Zoom video conferencing, which I really enjoy as I have made some really good friends in that group. It also offers me a chance to relax and unwind with some yoga stretches after a stressful week.”

We hope that the Cerebral Palsy Association of BC can continue to support Charlie in his adventures, and we are so glad that he is a member of our group!

World Cerebral Palsy Day is a global movement of people with cerebral palsy and their families, and the organizations that support them, in more than 60 countries. The day is an opportunity to celebrate, raise awareness and take action to ensure that people with CP have the same rights, access and opportunity as anyone else in their communities.

YOU can make a difference! Visit www.bc4cp.com to donate NOW!