Carving jack-o-lanterns, dressing up in costume and going door-to-door to collect candy, doing arts and crafts, and Halloween baking for her class every year are just some of the highlights of this spooky tradition for Brynn Chapel. The 8 year-old, who lives with cerebral palsy, also says that although she is slightly scared of the haunted house at school, she still looks forward to it.

Brynn’s cerebral palsy used to make trick-or-treating difficult. Her mom, Lore Rooney-Chapel, says that about five years ago, she realized that the majority of her neighbours have ground level front door entrances, which has made Brynn very happy. Now, she is able to go up to the door in her costume and ask for candy just like everyone else. “She used to get stuck at the bottom of the stairs while her brother took her bag up to the door,” says Lore. “We still have the stress of excited children running around her and cars in driveways blocking her path to the door, but these are few and far between in general”.

Brynn says her “favourite part of Halloween is dressing up in costumes and getting candy”. Last year, Brynn chose to be a mermaid for Halloween. Her family helped to incorporate her wheelchair into an elegant outfit that made her look like a mermaid sitting on a rock. Brynn showed off her mermaid outfit at the Cerebral Palsy Association of BC’s annual Dance Without Limits Halloween party. 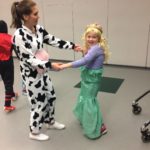 Celebrating Halloween to the fullest

Brynn demonstrates how celebrating Halloween by dressing up as a ghost, princess or firefighter and going door-to-door canvassing for candy can be enjoyable in spite of living with cerebral palsy. Her example shows that there are unique modifications that can be adapted to each child and their costume so it will be a fun experience for everyone.

Besides trick-or-treating, Lore says Brynn and her family go on Halloween outings such as visiting the pumpkin patch and the Stanley Park ghost train. Her family even went to the mall one year, giving Brynn the opportunity to blend in with her peers in addition to going out and partaking in Halloween festivities.

CPABC believes that everyone has the potential to live life to the fullest, including on special occasions like Halloween. Brynn’s creativity and love of dressing up allows her to truly enjoy Halloween Without Limits. We can’t wait to see what she’ll come dressed as this year!

Learn more about Dance Without Limits