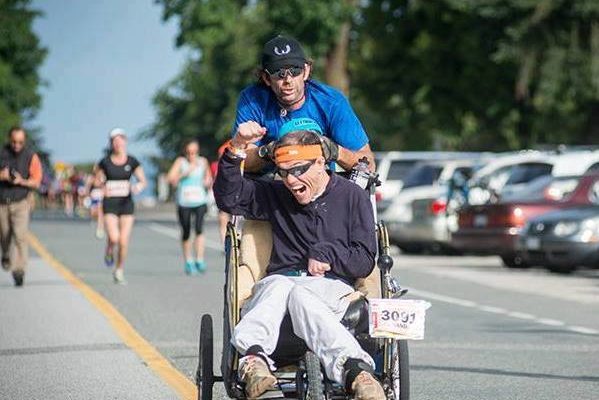 Team CPABC’s dynamite duo Jason Cole and Rand Surbey are back once again to participate in the Scotiabank Half Marathon on June 24th! This year is a little different though… They will be competing using a racing wheelchair. This will qualify them to officially hold the title of fastest half marathon wheelchair tandem team if they beat the record, as they have many years over. Not having this specific chair is what has held them back in the past from being properly recognized by Guinness World Records.

Jason explains, “After seven years of breaking the world record but not having our time recognized due to an equipment technically, all we managed to prove was that we were faster than them, not better than them. While previously I believed giving in to their conditions would weaken our stance, I have since realized that, in order to affect real change, we must first play by the rules we endeavour to change, even if we do not completely agree with them.”

But it is not only about the title for them. Jason and Rand are seeking this notoriety in the name of fairness and inclusion. For many years they have clocked faster than the documented record, but have gone unrecognized due to the lack of access to what GWR considers policy; an unmodified, commercially available chair. Jason comments,

“Our goal since beginning our racing careers has always been to advance the inclusivity of fun athletic events, like running races and the Tough Mudder, regardless of people’s financial or physical status.”

In order to help the pair claim their title officially, the Cerebral Palsy Association of BC has funded the rental of chair, and Wheelin’ Mobility has supplied the chair Jason and Rand have been using during their training and of course on race day.

It will be hard to miss these guys on the race course as they will follow their tradition and be decked out in costume to celebrate the occasion! “As always, we will be racing in costume and this year’s theme will super heroes, with Rand as the Hulk and I will be Captain Canuck,” Jason explains.

As an added element of excitement, they have added something interesting to their fundraising efforts. Jason tells us, “We have acquired a limited edition, minted $20 silver coin that was released from the Canadian Mint commemorating Captain Canuck, which we will offer as a prize draw, with entries available for anyone donating in excess of $50 to our fundraising efforts. The draw will take place at the finish line of the race.”

To support Jason and Rand in their record breaking race and goal of $5,000 visit their fundraising page.